Simply put – the Republican health care bill being voted on in the Senate later this week, if passed, will impact veterans. Many veterans will lose health care. For some, it will prove to be fatal.

Close to two million veterans across the country rely on Medicaid, and for around 365,000 of them, it is their only source of health coverage. Without it, they'd be uninsured. Being uninsured leads to more complex illnesses and brings one closer to avoidable death.

We need to tell Congress, our other elected officials and the general public that veterans, military family members, and their civilian supporters OPPOSE any effort to take away health care from millions of Americans, including our nation's veterans.

With escalating our military’s involvement oversees, trying to privatize healthcare for our returning service members, to cutting programs like meals on wheels and instituting a hiring freeze that impacts veterans; veterans are under attack.

And now efforts are being made to take healthcare from almost one million veterans? We need to send letters to the editor, call our radio personnel and post on our social media that veterans will not stand for these attacks – No Way! Now is the time to answer the call to action.

“No trees were killed in the making of this notice... however, a large number of electrons were diverted from where they originally wanted to go.” 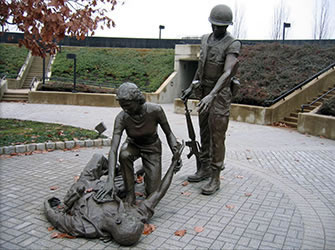